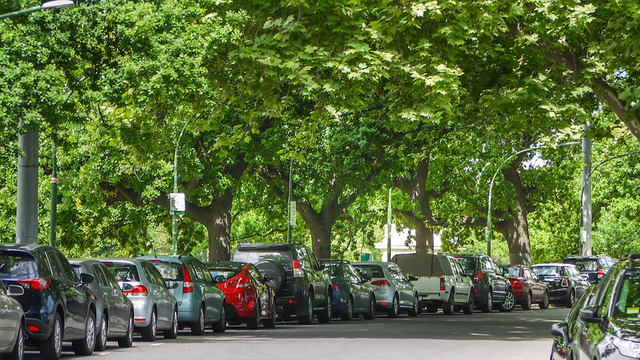 An opening slide fades from black, containing the Victorian Ombudsman logo with text below: “We take complaints about Victorian government organisations. This video outlines the Ombudsman’s Investigation into review of parking fines by the City of Melbourne.”

The text fades to a wide shot of a leafy tree-lined street in Melbourne, with cars parallel parked on both sides of the road. The image is slowly zooming in.

Text appears to indicate that the video is spoken by Victorian Ombudsman Deborah Glass.

Glass: This investigation, involving senior officers at Melbourne City Council’s ‘Parking Branch’, uncovered the rigid – and often harsh – approach taken to drivers who had made a genuine mistake.

Glass: It arose from a whistleblower complaint, alleging officers had misused their powers in order to raise revenue for the Council.

The zooming image becomes still, and text appears on the right half of the screen: “It was alleged that senior officers had misused their powers when reviewing or deciding to prosecute infringement notices.”

Glass: Drivers issued with a fine have a right to dispute their infringement, either by:

A slide appears on screen, containing a visual representation of the fine review process as below:

Overarching the process is another arrow, extending from ‘Driver receives fine’ to ‘Elects to go to court’, indicating the ‘Option to elect to go to court directly’.

Vector symbols appear on screen above each of the steps in the process: a hand holding a document, a government building, a gavel.

Glass: Their infringements are then assessed in accordance with relevant guidance documents, and a decision made on whether to ‘Proceed’ or ‘Withdraw’ the fine.

A new slide appears, with a vector symbol a magnifying glass inspecting a stack of documents. Beneath is the text “Infringement is assessed”.

Text of two options branch out below:

Glass: The whistleblower provided several examples where the Council continued to pursue infringements that were arguably unfair.

Glass: The investigation found infringements had been upheld against drivers who:

“Fines were upheld against drivers who:

Glass: This error, referred to as the ‘PayStay zero/O error’, resulted in no payment being recorded against the vehicle’s correct registration, despite the driver having made a payment.

A slide appears on screen containing a quote from the Senior Prosecutions Officer to the Program Manager:

Two examples of Victorian Number Plates appear on screen, demonstrating the similarity in appearance between an O and a Zero. One was issued prior to August 2013, and the other issued after August 2013.

Glass: The investigation found that the Branch knew drivers were challenged in distinguishing zero from O. Further, Council officers can easily confirm whether the driver has mixed up the number and the letter.

A slide appears on screen containing an excerpt from the Investigation report:

“The investigation identified five emails in which Branch staff … raised concerns about upholding these infringements.”

Glass: Guidelines set in accordance with the Infringements Act stress that internal review decision makers should exercise discretion in each case.

A slide appears on screen containing an excerpt from the IMES Internal Review Guidelines:

“Enforcement agency decision-makers are required to exercise their discretion in making decisions ...”

Glass: But documents internal to the Parking Branch did not allow officers discretion to make decisions based on individual circumstances, including these sorts of driver errors.

A still image of a row of diagonally parked cars pans slowly up the screen from bottom to top.

Glass: The investigation found that overall revenue from infringements had declined. The evidence did not suggest that improper revenue raising was a driving force for the rigid decision making practices.

Glass: But the individual impact on drivers who received these fines should not be understated.

A slide appears on screen containing an excerpt of an email from a member of the public to the Lord Mayor of the City of Melbourne:

“If an error was made [by my husband], the fact that he paid for a space shows a clear intention to do the right thing …”

Glass: Public organisations have a duty to exercise common sense and fairness in the decisions they make.

A further excerpt from the same email appears:

“Whatever happened to common sense and decency?”

Glass: But in this instance:

led to poor decision making and a concerning culture within the Branch.

Glass: In October 2019 Melbourne City Council changed its practices, so drivers who make the zero/O error now should have their fine withdrawn on appeal. They have also agreed to refund people who had appealed against the fine in previous years.

Glass: I welcome their commitment to improve the processes within their Parking Branch.

The still image of the leafy tree-lined street in Melbourne reappears. A panel slides in from the right of screen containing the following text:

The shot fades to a closing screen containing the Victorian Ombudsman logo and text below: “To read the report, or for more information, visit our website. www.ombudsman.vic.gov.au . Full references can be found in the Investigation report. Music: Purple Planet Music.”

The screen fades to black, with the music fading to an end at the same time. End.

Melbourne City Council acted unfairly in upholding fines against drivers who had paid for their parking but made a simple error when entering their registration number, the Victorian Ombudsman has found.

Ombudsman Deborah Glass said the Council had “applied an overly rigid approach to parking errors” by upholding fines against drivers who had confused the number 0 with the letter O when entering their registration in the PayStay app.

“We estimate over 1,200 motorists were affected by a PayStay mistake, which the Council could easily have checked when the driver requested a review,” Ms Glass said.

“The Council knew the number 0 and letter O were virtually indistinguishable on registration plates, and drivers would not be aware they had made an error.”

Tabling her Investigation into review of parking fines by the City of Melbourne in the Victorian Parliament today, Ms Glass said there were other instances where the “overzealous” attitude of some senior managers in the Council’s parking branch had undermined the basic principles of fairness.

She said the Council had reworded its Penalty Reminder Notice – sent to drivers if an infringement has not been paid after 21 days – to encourage payment. The Council’s Chief Legal Counsel provided internal legal advice that sections of the wording on the Notice were “apt to mislead a person … and appear a threat to a vulnerable recipient.” Yet, the Notice was sent out to drivers for at least three months before being brought into line with the legal advice, after the Ombudsman asked questions about it.

Ms Glass said the investigation began after her office received a whistleblower complaint alleging that Council officers were making these sorts of decisions to increase Council revenue.

“The allegation that the Council was improperly raising revenue was not substantiated,” Ms Glass said.

“The Council was losing money taking these matters to court, although the practical outcome of inflexible decision making undoubtedly contributed to the Council’s bottom line.”

“These actions were apparently driven by an entrenched, overzealous attitude of some in senior management in the parking branch, a mindset that the customer is usually wrong and drivers must be punished for their infractions, no matter how small or how great the mitigation.

“This attitude continued for years, despite some council officers expressing concerns about it to management.”

Ms Glass welcomed the Council’s acceptance of her four recommendations, which also included that it: “conduct an independent review of the behaviours, processes and systems, reporting structures and governance of the Parking Branch, including implementing a process to monitor the use of discretion in reviewing infringements”.

“The Council has not shirked its responsibility for years of unfair decisions and has agreed to make amends, both on an individual and systemic level,” Ms Glass said.

“I commend them for their response, and hope this report is a reminder to all who exercise discretion of the need to keep fairness at its heart.”

News Credit card deception by former Warrnambool Council Manager ‘greater than had been exposed or admitted to’: Ombudsman